PEN has made significant progress since its inception in June 2013. The support of Minter Ellison Rudd Watts Lawyers has given PEN a major boost.

Membership has continued to grow and we now have many supporters likely to become members in 2015. We are still a Wellington based network which has the advantage of being close to key Government agencies and Ministers. We will seek to expand into the rest of New Zealand in 2015 but will not rush doing so.

During 2014 PEN held 7 events ranging from a small strategy meeting to a July gathering of 75 to listen to Ambassador Shane Jones speak about his role as Ambassador for Pacific Economic Development.

Much of our time has been spent learning about the various Pacific countries, their limitations and where and how NZ exporters could improve their offerings to better serve the market.

Linked to this has been the ever escalating value of both the $US and the $NZ and the influence of China on the region (including New Zealand). A good article recently appeared in the Sydney Morning Herald equating iron ore to dairy prices and the influence of the Chinese markets on both of these key Australian and New Zealand exports. See the article.

The thoughts expressed in the article pose questions on the validity of China as the chosen market of the future by our politicians and policy makers. Simply the pros don't match the cons and bring into question the current direction of New Zealand's export promotion efforts. 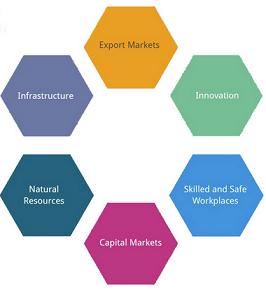 Another impediment to progress was the release prior to the Christmas break of the report into the operations of the Ministry of Business, Innovation and Employment (MBIE) – The Government's primary 'Business facing' agency.While the preparation of the report was undertaken in February 2014, the implications for the Government's Business Growth Agenda targets are disappointing. Simply, this key Government Ministry appears unlikely to be able to do much in the foreseeable future to help an increase in NZ's exports to 40% of GDP by 2025. This is due to the time it is taking to absorb many previous separate agencies, refocus and undertake the mega job the Government believes it can do.

This is serious stuff. PEN has as its goal the doubling of New Zealand's exports to Pacific Island countries by 2018. If MBIE (as one of the Government's key export policy advisors) is unlikely to play an early role in delivering an export growth target, what are PEN's chances?

These issues are likely to be the drivers of PEN's activities during 2015. We are far from taking the step to revise our vision, rather we see a need for an approach to suggest that the Government  reappraises and realigns the roles of some of its Ministries and agencies to better drive the Business Growth Agenda's export promotion target.

We need to ask questions and to seek a reassurance that changes will be made to ensure that our vision is not side tracked because of a failure to perform by key Government organisations.